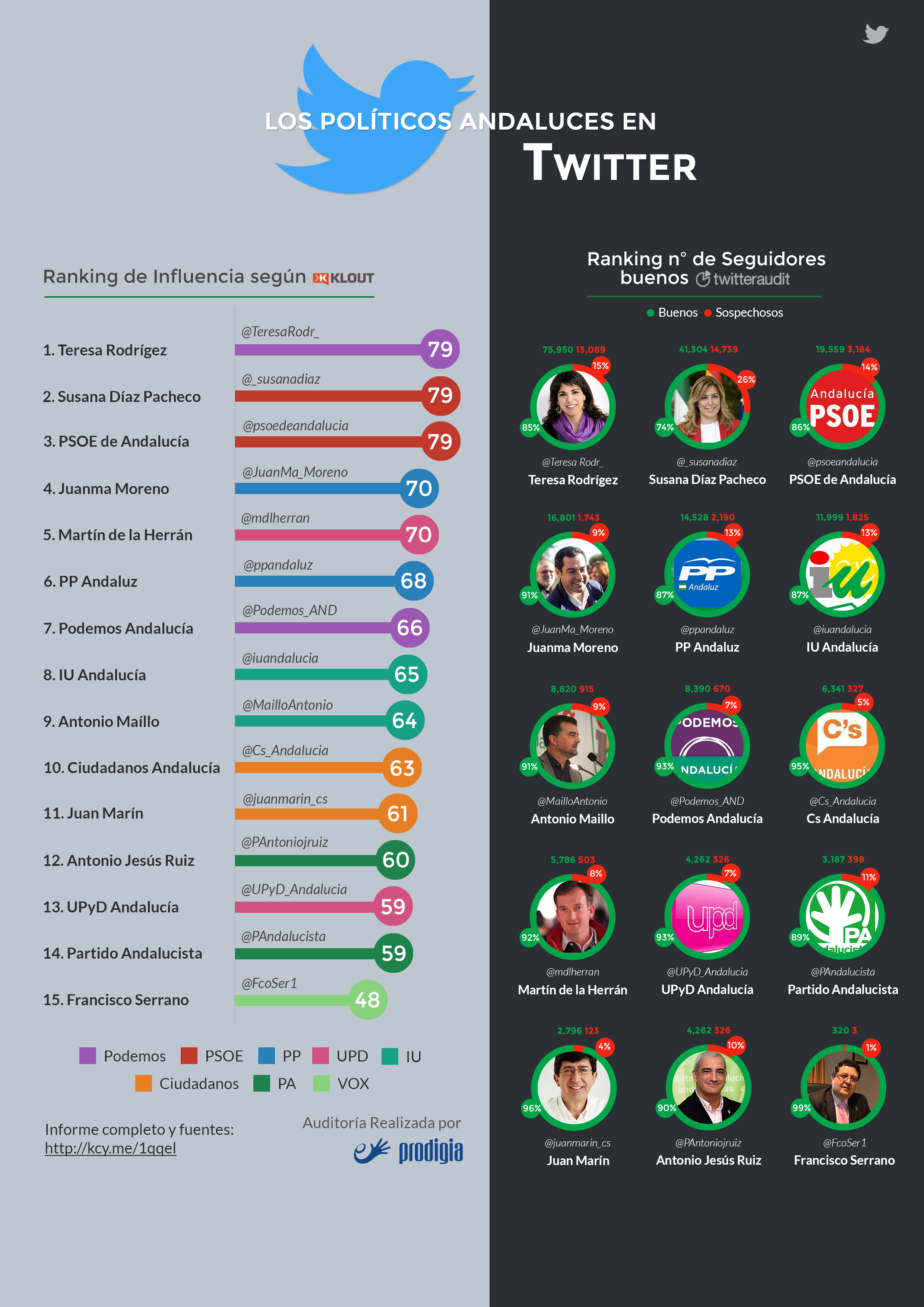 Provide accurate information in the face of the upcoming elections of March 22 to the Presidency of the Junta de Andalucía on political parties and personal brands on Twitter, for which an audit has been prepared that gathers the influence of the candidates and their parties at regional level, and the quality of their followers.

The accounts have been located through the Twitter search engine using the names of the political parties and Andalusia. The 15 localized accounts have been ordered by number of followers and later have been analyzed with several public tools and available to consult by any Internet user.

The analyzes show data from some accounts that seem to have false or suspicious followers.

However, it could not be asserted that the account holders have bought or acquired followers in an illegitimate manner. It could have been a friend or "professional" who had provided the service, including a third party with the intention of damaging the reputation of the account. It could also be inactive followers that are mistakenly taken as false by the heuristic algorithms of the tools used.

But, just as we take care of the personal brand in our hygiene, or the facade of our political headquarters if someone smears it, we must also take care of the health of our followers and clean our digital brand when on Twitter it is affected by "suspicious" followers .

As a positive feature of the profiles analyzed, unlike other politicians audited in other audits (audit of politicians in Malaga), no percentage of false followers from countries or discordant languages ​​has been found in any of them. Which does not suggest a flagrant case of buying followers, and if it had been carried out, would not be cheap false followers, but fake followers more expensive, since they would be created specifically from the cities where each political brand is. The most economical followers buying systems usually bring followers from USA, China and other countries. If the followers are from a specific country and city, they have a higher price, since they are created expressly for said account. We can not affirm reliably that the analyzed accounts have false followers, although the tools used thus show it.

On the other hand, users usually do not distinguish between true and false followers, so having an inflated account with robot followers, distorts the popularity of our account and distorts the influence or entity of our digital brand, providing the number of followers with information the wrong citizen, who can be influenced in his decision by considering the number of followers of candidates or parties similar to a poll of intention to vote. That is, it would be more popular that candidate or party that has more followers. Also some analysts take this information into account. It is for this reason, that it was intentionally, unintentionally, or by third parties, the increase of "suspicious" followers, it is the responsibility of each personal or political brand to maintain reliable data on the number of followers, to be able to hire cleaning services of these robots, just as the cleaning of our facade is contracted if it is stained or painted.

Interpretation of the data of the 3 main political leaders:

We have two political leaders quite tied, who lead against the rest of the contestants. It should be noted that the klout of Teresa Rodríguez is very high, similar to that of Susana Díaz. This is because both have connected to Klout both Facebook and Twitter, and each one wins in a social network. Teresa has 45,000 fans on Facebook, well ahead of Susana Díaz that only hits 9,000. However, although Teresa also has many more followers on Twitter than Susana Díaz, it is Susana who has a community with much greater engagement (interaction and link of its users). If we look at the Time Line of both accounts, we see that Susana's tweets are retweeted and marked as favorites a substantially higher number of times, specifically each tweet is retweeted an average of 191 times and marked as favorite an average of 90 times, compared to Teresa whose tweets are retweeted on average 122 times and marked as favorites 57 times. The followers of Susana, despite being minors, micro amplify and interact to a greater extent. However, Susana tweets an average of 0.43 daily tweets, compared to Teresa who sends 3.11 tweets per day, more than 7 times her rival. In this way Susana has had 54.702 Retweets, against Teresa who has achieved 186,007. This explains that although Susana has a greater engagement with her community, Teresa manages to alleviate that difference by being more active on Twitter.

Susana has a potential that could be exploited by being more prolific in her tweets, which would increase her influence and microamplification on Twitter. Likewise, Susana could increase her Facebook fans to shorten Teresa's difference. Teresa for her part will do well to promote Facebook, having in this social network a greater reception than its rivals.

Both would do well to incorporate Klout the rest of social networks (Google +, YouTube, your blog ...) as the PSOE account, because in this way, this popular index would add the influence on other networks social, increasing their value and position in public rankings such as kloutspain.com/?activity_id=1 (specific ranking for politicians in Spain)

On the other hand, Juanma Moreno is quite delayed regarding Teresa and Susana. It has many less followers and therefore their engagement (influence and interaction on Twitter) is much lower, which reflects having 9 points less in Klout (9 times less influence). He does not have Facebook connected to Klout, which would increase his score, although not very much since he only has 5,600 fans. Tweet an average of 1.95 times a day, above Susana and below Teresa. By having a very low number of followers, their tweets are retweeted an average of only 40 times and marked as favorites an average of 23 times. As an opportunity he has work to do to capture real followers and could increase his communication on Twitter.

It is observed in the ranking that Podemos and PSOE are in the lead, followed by PP. It should be noted that although Albert Rivera at the national level stands out very well, in Andalusia there is still a lot of work to be done. PA and VOX are the ones who have the least influence on Twitter.

In general, Andalusian politicians have far fewer "suspect" followers than political leaders at the national level.

We hope that the data will help both the owners of the profiles to verify the health of their accounts and take the measures they deem appropriate, as well as the users to differentiate the real influence of each account and the accuracy of the number of their followers and real influence .

Data source and ranking by number of followers.

Candidate of Podemos to the Junta de Andalucía. Anticapitalist, teacher, activist in Marea Verde and feminist. 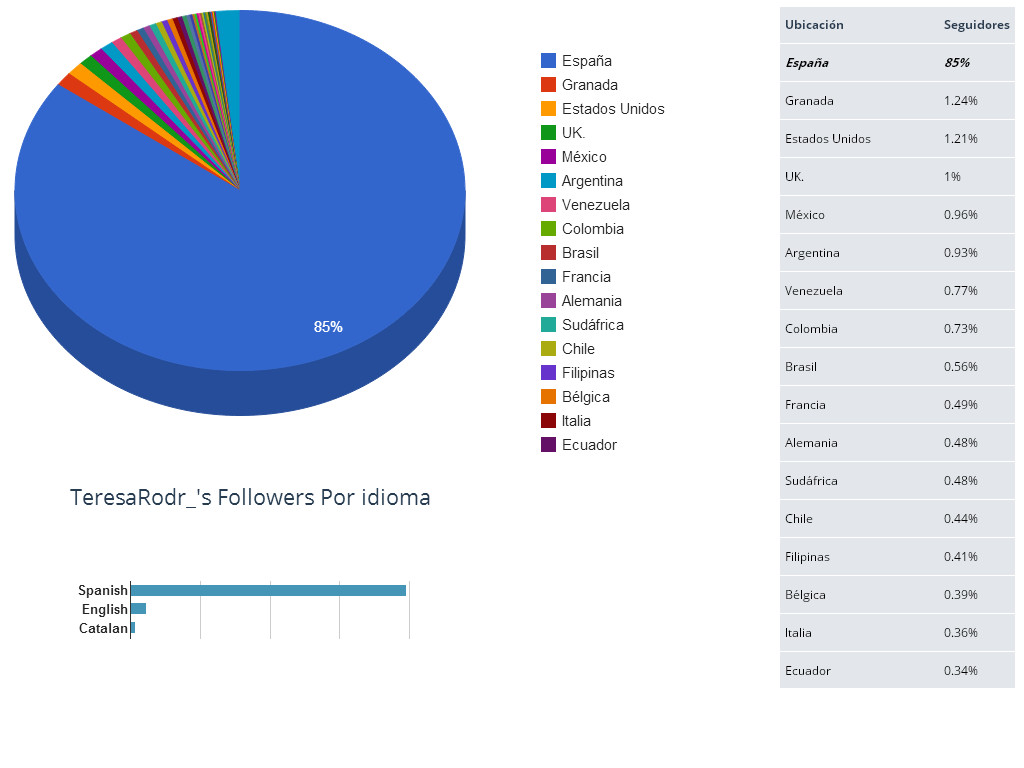 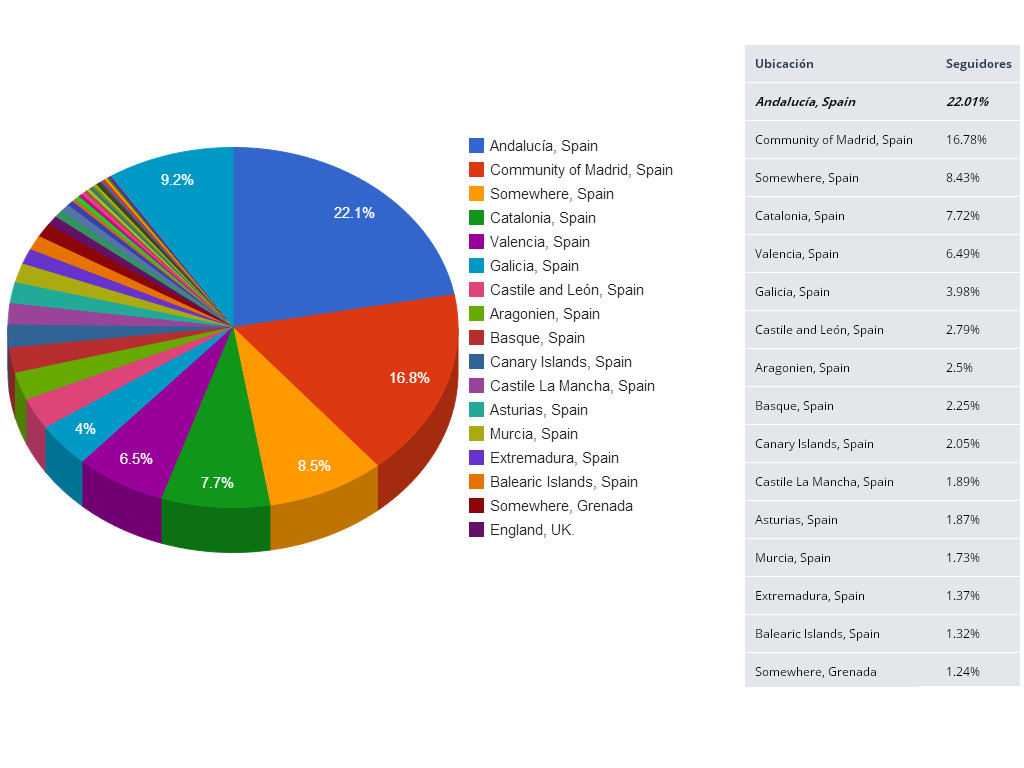 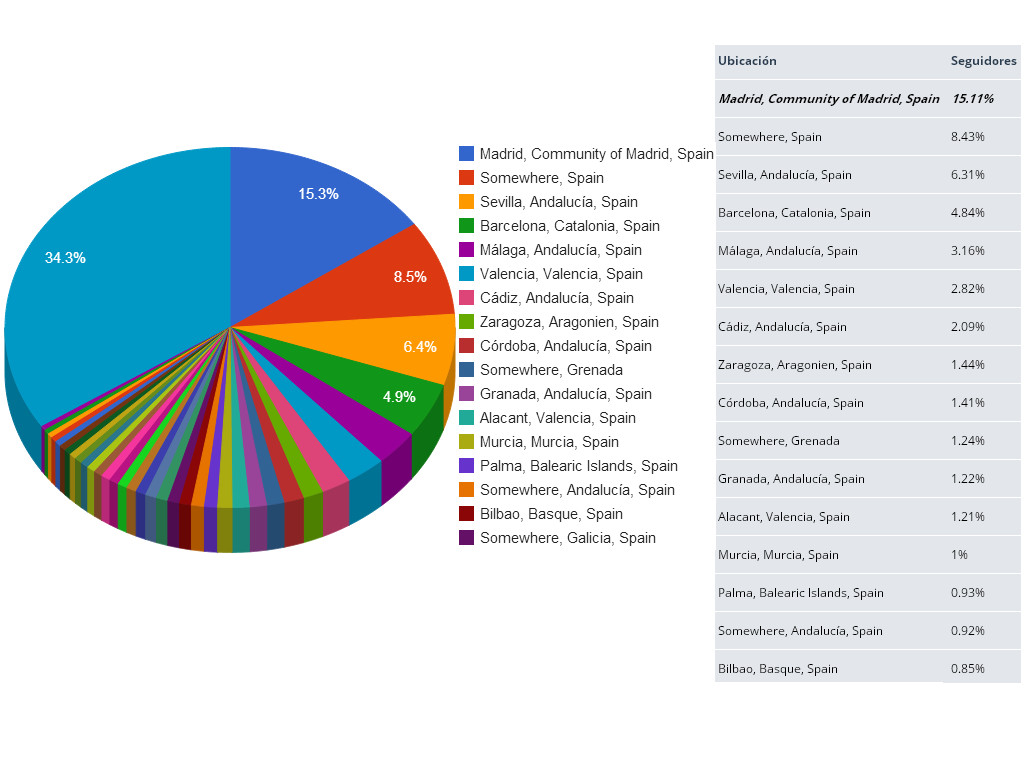 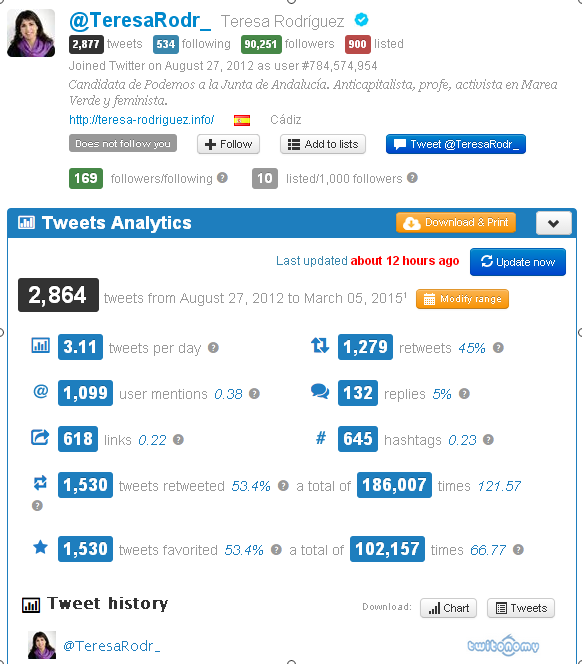 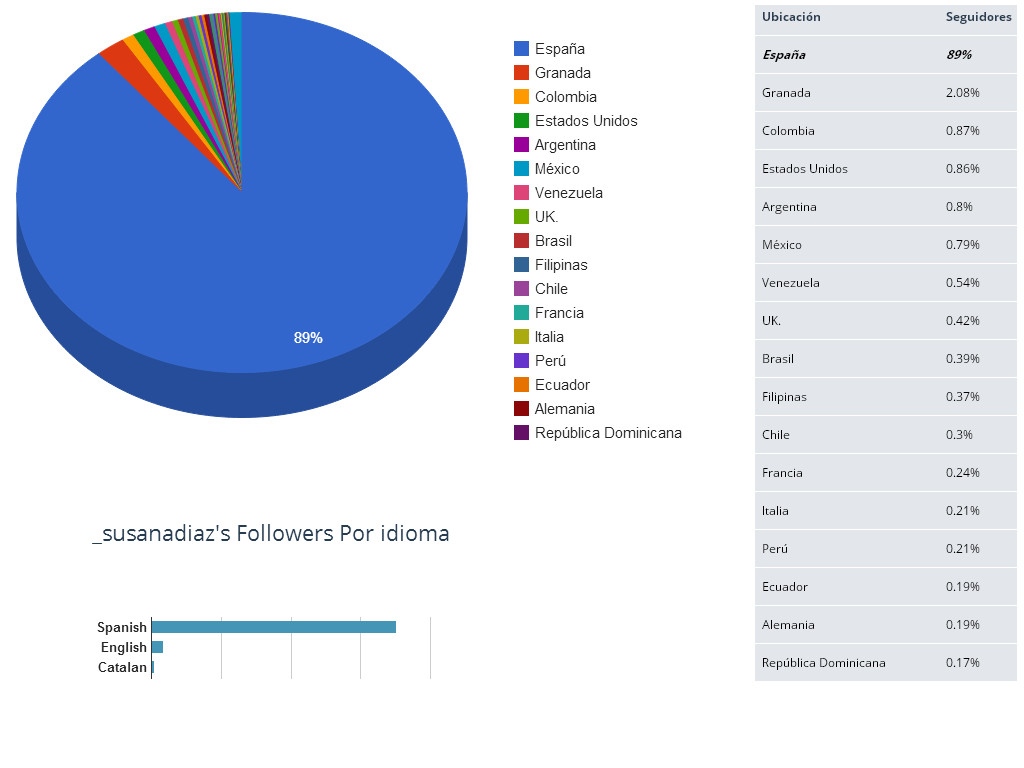 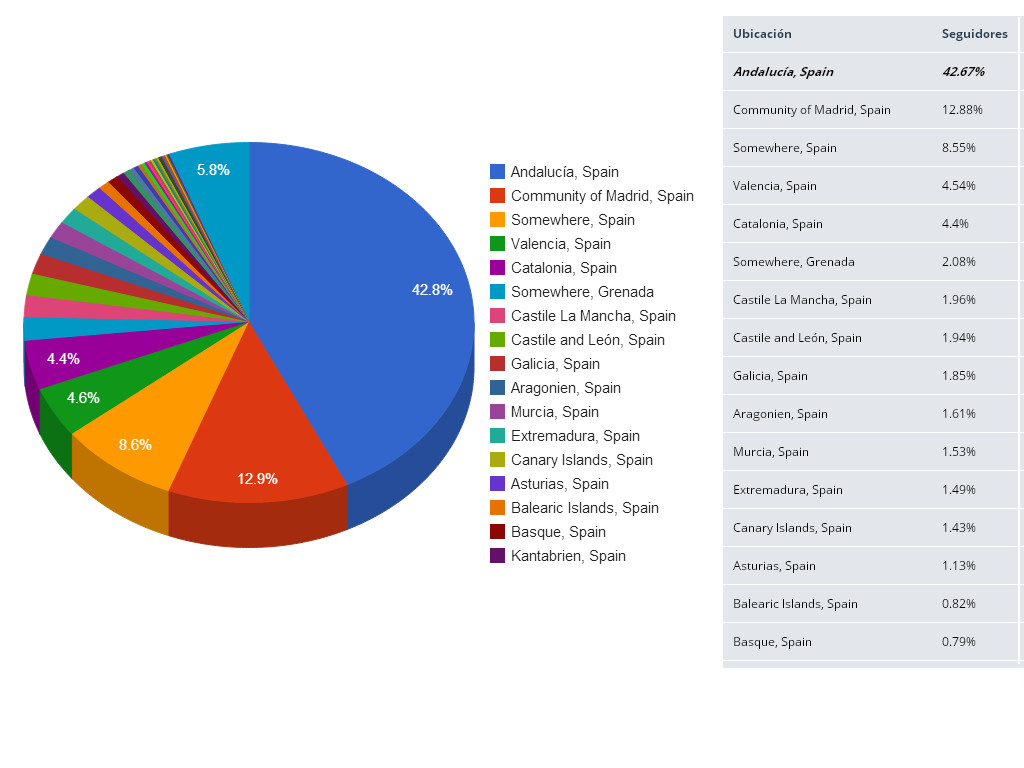 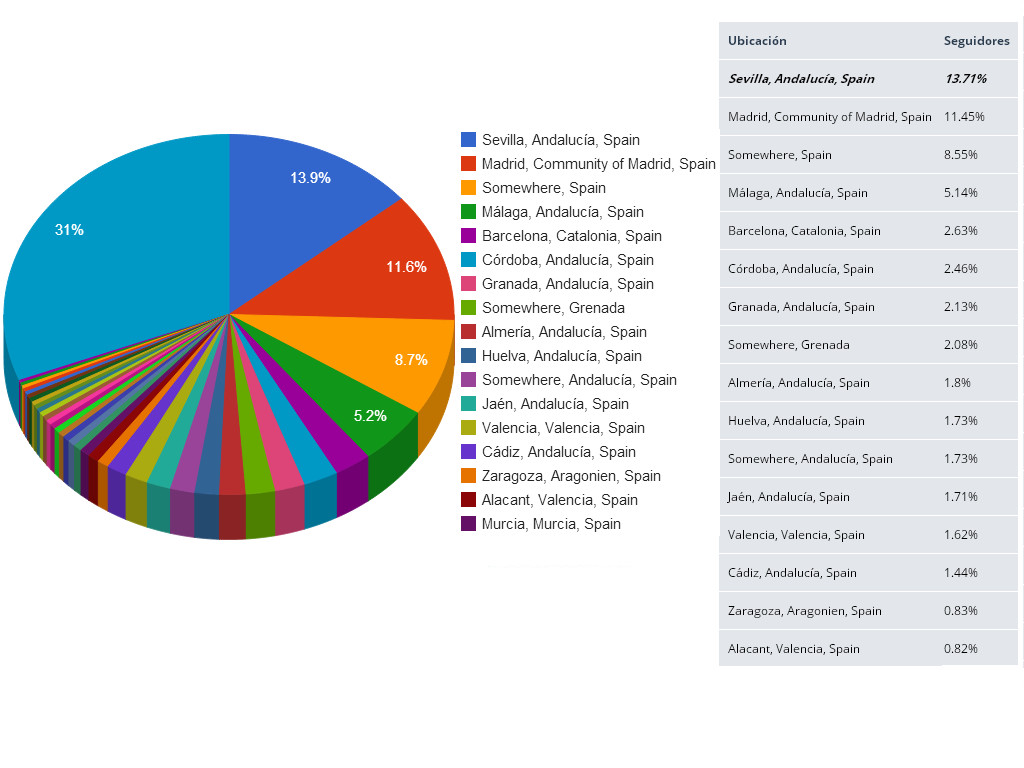 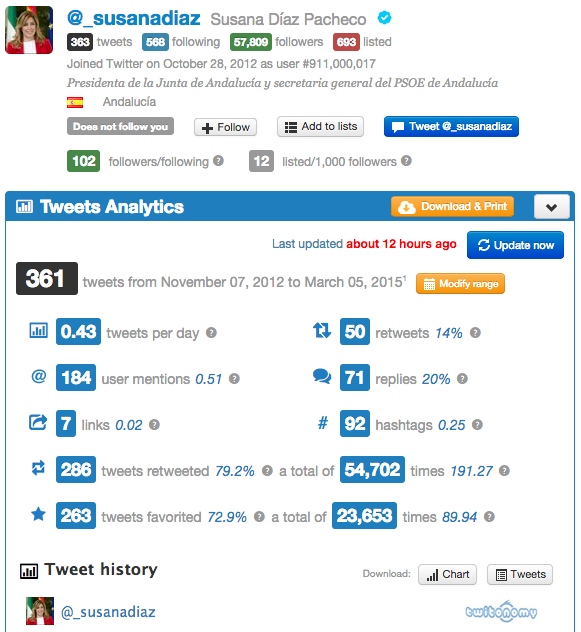 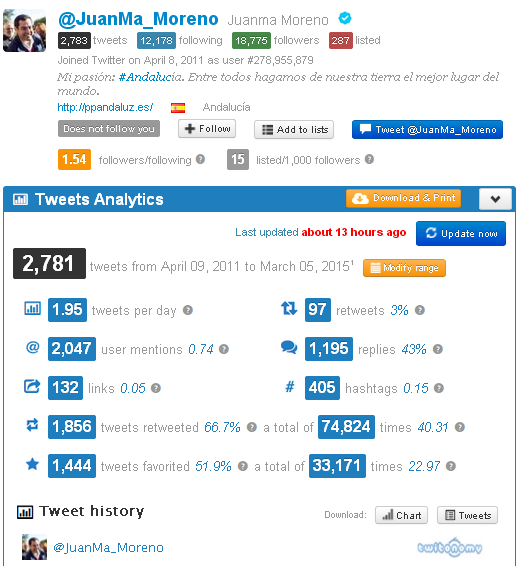