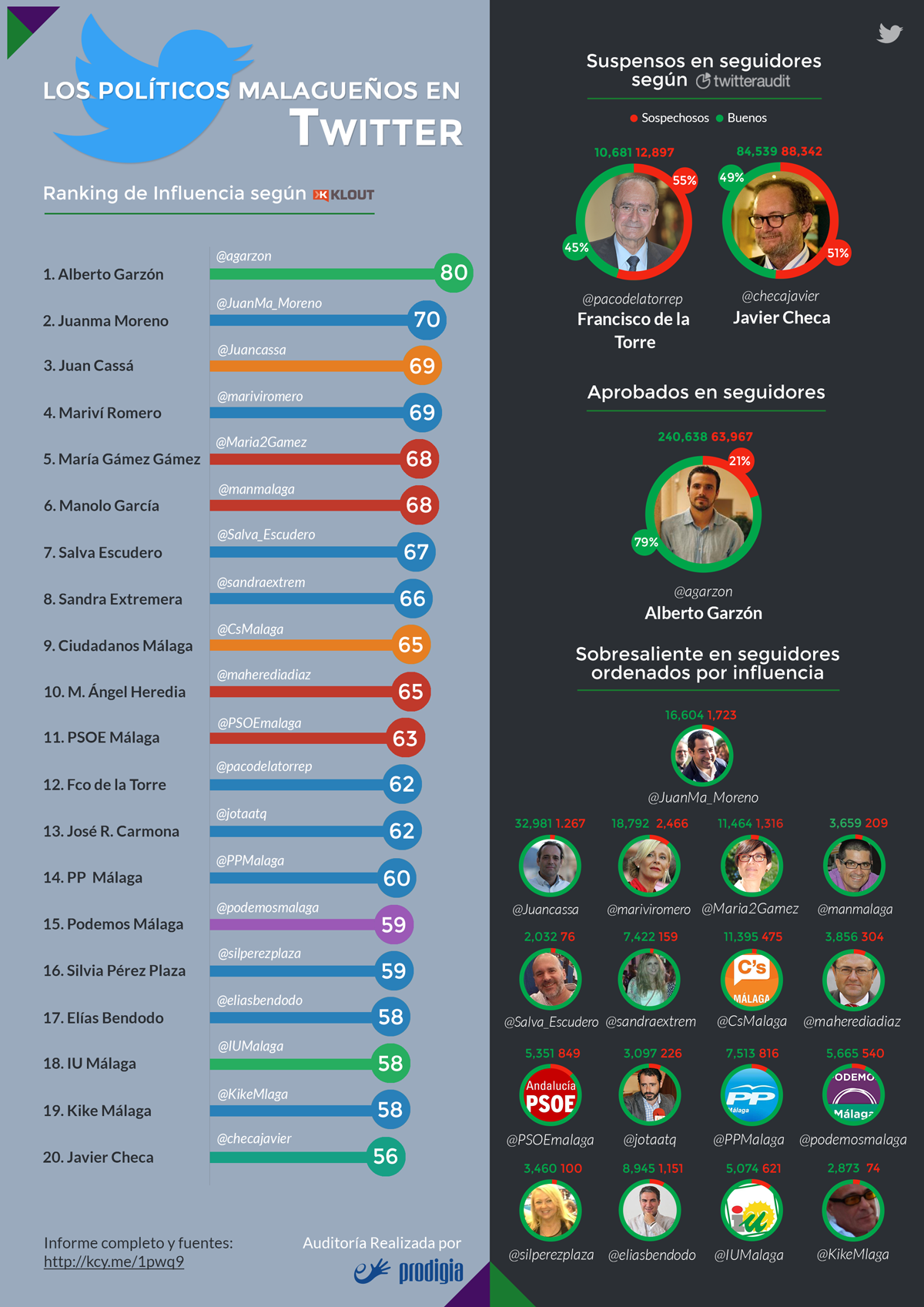 Provide accurate information in the face of the upcoming elections on personal political brands on Twitter, for which an audit has been prepared that includes the influence of the politicians of Malaga, and the quality of their followers.

Accounts have been located through the Twitter search engine using the names of the political parties and Málaga. They have been ordered by number of followers, and the 20 accounts with the largest number of followers have been analyzed with the following tools. Several public tools are used and available for consultation by any Internet user, of which is attached under each of the 111 accounts analyzed, the rating they provide. These are:

The analyzes show data from some accounts that seem to have false followers, which is endorsed by the level of influence as the size of the account does not correspond to the influence value measured by Klout.

However, it could not be asserted that the account holders have bought or acquired followers in an illegitimate manner. It could have been a friend or "professional" who had provided the service, including a third party with the intention of damaging the reputation of the account. But, just as we take care of the personal brand in our hygiene, or the facade of our political headquarters if someone smears it, we must also take care of the health of our followers and clean our digital brand when Twitter is affected by false followers.

On the other hand, users usually do not distinguish between true and false followers, so have an inflated account with robot followers, distort the popularity of our account and distort the influence or entity of our digital brand. It is for this reason, that it has been intentionally, unintentionally, or by third parties, the increase of false followers, it is the responsibility of each personal brand to maintain reliable data on the number of followers, to be able to hire cleaning services of these robots, like the cleaning of our façade if it is stained or painted.

We hope that the data will help both the owners of the profiles to verify the health of their accounts and take the measures they deem appropriate, as well as the users to differentiate the real influence of each account and the veracity of the number of their followers.

Data source and ranking by number of followers.

Economist and deputy in the Congress by @iumalaga. Social activist and defender of human rights. Author of 'The Third Republic' (Peninsula, 2014) 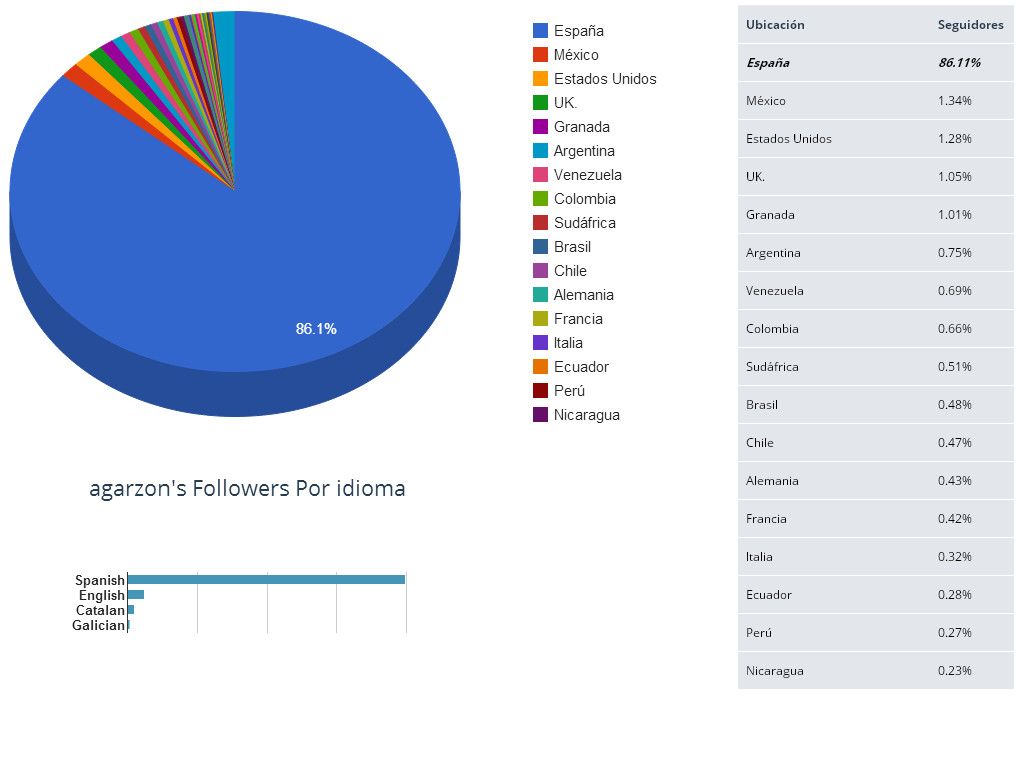 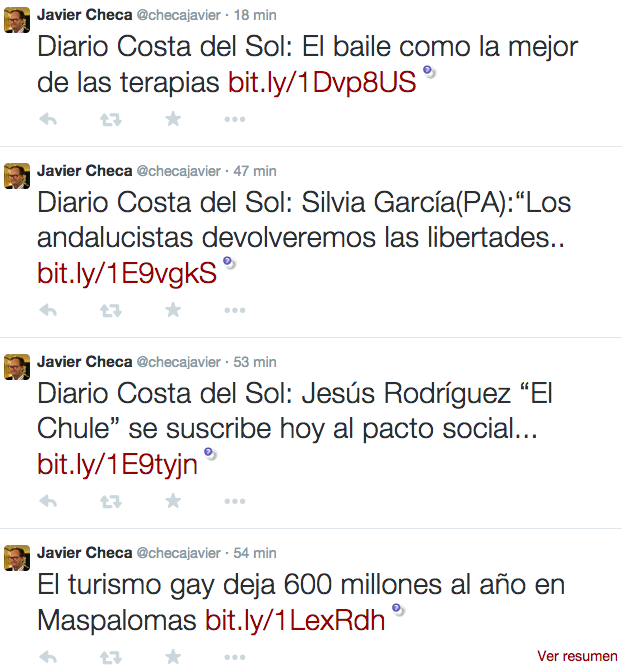 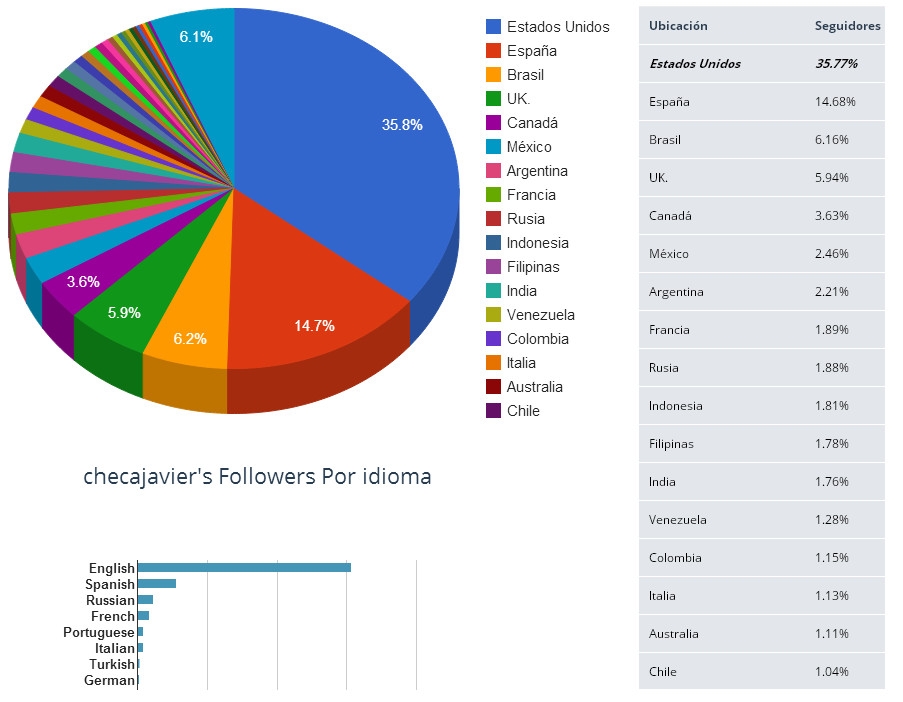 Interpretation of the data:

In this case the difference between the number of followers (189,089) and its influence Klout (56) is abysmal, which points to a highly probable acquisition of false followers. This die is endorsed by visiting the timeline of the Twitter account, in which we observe that most publications have zero interaction with their followers (zombies). In an account of this size it is very significant that the engagement or interaction of the users is nonexistent. This is the case of this more flagrant analysis of low influence on Twitter with such an excessive volume of followers, which is further corroborated by Tweepsmap where the application shows that less than 15% of followers are located in Spain. In our opinion based on the tools provided, it is an obvious case of buying fake followers or robots, although this does not imply that it was made by the account holder, and may have been done by a third party.

Candidate of Citizens to the Mayor's Office of # Málaga. A new way of doing politics is possible: close, participative and at the service of the malagueño @CsMalaga 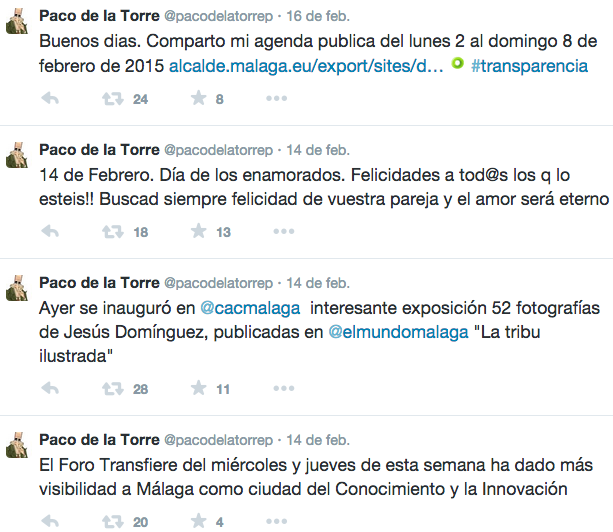 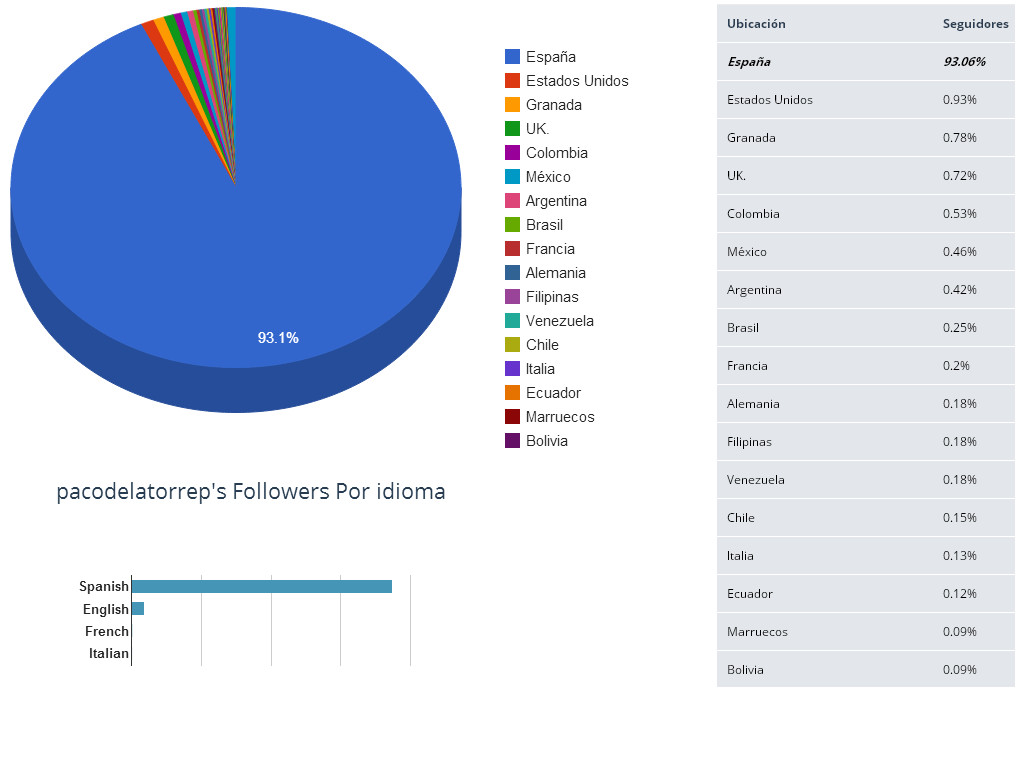 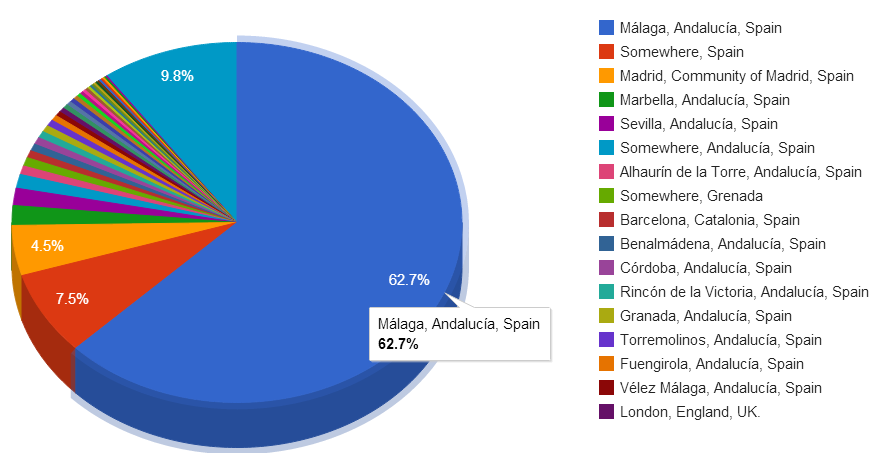 Interpretation of the data:

As a positive fact it should be noted that the interaction (RT's and mentions) of its followers is high in its time line, that is to say that those of the followers that are good do interact to a large extent with the tweets broadcast. Unlike the account of @checajavier, it is not appreciated that there is a high percentage of followers from other countries, being 93% of Spain, and most of the city of Malaga, which is also a positive data in this case . Although, there is a high percentage of followers marked as suspicious by the analysis tools, having an influence in minor klout to accounts of a similar size.

Citizens like you, listening to you and working for you. Together we will achieve a better Málaga. malaga@ciudadanos-cs.org. Malaga

Moving tab and converting indignation into political change. Because Junt @ s WE CAN!

I was born on January 1, 1960. Professor of Sociology in the Complutense. At present I am a socialist deputy for Malaga in the Congress. Spain jatorresmora.wordpress.com

Círculo PODEMOS in Málaga that encompasses the district of Carretera de Cádiz. We are fighters

Councilor of the United Left in the City Council of Malaga and spokesperson for the provincial group in the Provincial Council. A tool at the service of citizens.

Welcome to the official profile of New Generations of Malaga. President @ Luis_Verde. @PPMalaga

Socialist from Malaga District Cruz de Humilladero. My treasures are my daughters, my wife and my friends. Secretary of Culture PSOE Málaga and Lawyer. Personal profile.

Secretary of Electoral Action 2.0 PP Málaga. Freedom of expression must never protect against slander or insult.

General Secretary of @ppmalaga, torremolinos of birth and heart. President of the Commonwealth of the Costa del Sol. Spanish hopeful

Spokesman of the PSOE in Marbella, Andalusian parliamentarian.

Vice President of the Diputacion de Malaga and Deputy Secretary General of the PP of Malaga but mostly a pedestrian.

Degree in Law. Married and with three kids. Mayor of Rincon de la Victoria, Spokesperson of the PP in the Diputación de Málaga. Working for a City 10.

The Claro Que Podemos team for the city of Málaga

Communication, Networks and Image Manager @pptorrox. Entrepreneur since always and passionate about photography and communication. The Morche and Torre d Benagalbón

Málaga 1968. Lawyer from 1992-2011. Local Coordinator of IU Málaga since 2008.At present, councilor and Spokesperson of IZQUIERDA UNIDA in the City Council of Málaga

Official Website of the Local Council of UPyD in Málaga Capital. We will keep you informed of all our activities.

Head of Organization of the Local Council of UPyD Málaga. Lawyer in practice.

Profile of the Socialist Group in the Diputación de Málaga

PP account of Fuengirola, to discuss the news of our city, Malaga, Andalusia and Spain.

Economist and social activist. Elected member of the Citizen Council of Málaga for the list @CQPMalaga. Malaga

Senator for Malaga since November 20, 2011. President of the PSOE of Benalmádena. Deputy Secretary General of the PSOE Malaga.

Economist. Postgraduate in Teaching and Master in Sociology. SG of the PSOE of Málaga Este (@psoepalo). Rolero, cinephile and avid reader. Dreamer and vindictive.

The impossible is possible today. Building with Podemos Málaga Oeste

Lawyer, married and father of three children. President of the Popular Party of Torrox, of the Commonwealth of Costa del Sol Axarquia and Axaragua.

Official Twitter of the Popular Party and New Generations of Torrox - pptorrox@gmail.com

Malagueña, economist and diploma in Tourism. Councilor for Economy, Finance and Personnel of the City of Malaga. PP Andalusia Economy Coordinator

Archaeologist medievalist, member of @ PPMalaga and @PPRinconV and some other things.

Official Twitter of the Círculo Podemos of the municipality of Vélez-Málaga. Velez Malaga. sea ​​Tower

Hopeful pessimist. Member of the Citizen Council of Podemos in Malaga.

29 years. Degree in History. Candidate and spokesman of the PSOE in the City Council of Sierra de Yeguas (Málaga)

68. @ PodemosAlgarrob Podemos Algarrobo 997 We can

Círculo de Podemos in Algarrobo, Málaga. Join us and let's make policies through people and for the benefit of people.

Lawyer. Currently Director of Education and Youth of @ diputacionMLG. Member of @ PPMalaga. #freedom

English teacher. IU Candidate for the Mayor of Vélez-Málaga. Responsible for the provincial organization of @iumalaga and local coordinator of @iuvelezmalaga. MAR .. Vélez-Málaga

Circle we can in Malaga located in the 10th district

Coordinator of UPyD in Málaga-Capital. Notary Officer. Objective in Politics; Freedom and Justice

1992. Degree student in Mechanical Engineering at the EPS of Málaga. I love my city Member of the Local Council of UPyD in Malaga.

Responsible for Events at the Local Council of Malaga of UPyD. Málaga (Spain)

Personal profile. Malagueño, 44 ​​years old, Married with 3 children, Ldo in Law, Attorney of the Courts, Senator of the PP, for the Province of Malaga.

Councilwoman of IU in Vélez-Málaga, graduated in Physical Education, Black Belt of Taekwondo. I love sports and go out to demonstrate against the cuts of Rajoy. Vélez-Málaga

Twitter of the PSOE San Pedro Alcántara. We work for the equality, dignity and well-being of all the neighbors.

Member of the Citizen Council of Podemos Málaga.

Lawyer. Public Contracting and Classification of Contractors. Secretary of the Málaga Abierta Office of @ PPMálaga.

We are the LGTBI area of ​​the @PSOEMalaga that works for the rights of lesbians, gays, transsexuals, bisexuals and intersexuals. Lgtb@psoemalaga.es

It is time for the voice of the people to be heard, among all of us we can. The 25M 1,200,000 people launched a message of change. But it is only the beginning.

Profile of the Circle We can Malaga District 4 (Nueva Málaga - Bailen - Miraflores).

Working team of @ppmalaga of District 2-East of @Malaga

Melillense by birth, Madrid from training, Malaga and Marbella by decision. Currently at @ Ayto_Marbella @PPMalaga

Secretary of Tourism of Psoe de Málaga, General Secretary of @PSOE_sanpedro and Councilor and Deputy Speaker of the Municipal Socialist Group of the Town Hall of Marbella. San Pedro Alcántara (Málaga)

Lieutenant Mayor of the Town Hall of Alozaina. Provincial Deputy of Malaga. PSOE-A.

Youth Area of ​​IULV-CA in the province of Malaga. We are future, we are Popular Power. areajuventud.iumalaga@gmail.com

Local grouping of Almargen (Málaga). Other accounts votes, we count people. We care about YOU. THE RED BLOOD AND THE HEART TO THE LEFT.

General Secretary of the PSOE-A de Coín. Spokesman of the Municipal Socialist Group in the City Council of Coín. Secretary of Economy and Employment in the CEP of Malaga.

Mayor of Casabermeja (Málaga) by IU-CA. I am a sports doctor and physiotherapist, although now I am fully dedicated to my political work

Circle We can of the district 9 of Malaga that includes Campanillas, Santa Rosalía and Maqueda.

Because Spain will be what the Spaniards want.